Latest News
Home /1,500 red zones desealed in 11 days as Covid-19 cases dip, Health News, ET HealthWorld
NEW DELHI: Within the past 11 days, the number of containment zones in the capital has reduced by nearly 1,500 owing to the sharp decline in Covid-19 cases. This means that fewer areas are under Covid-related restrictions and all economic activities can be restarted as there is no bar on the movement of people. 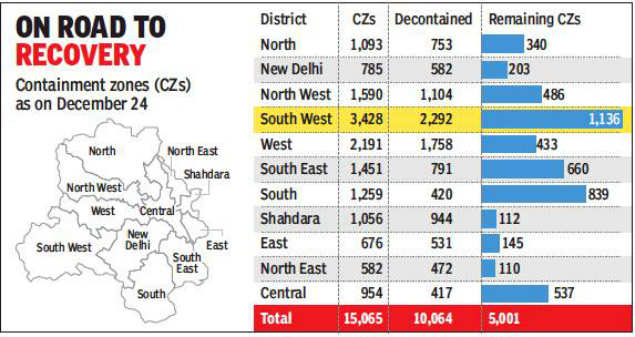 The scaling down of containment zones starts 14 days after no Covid-positive cases are reported, but surveillance of the area continues for 28 days.

Initially, the containment zones were huge, some of them having more than 40,000 people living within a single one. The authorities faced multiple challenges in managing the zones and drones and central paramilitary forces had to be deployed. However, over the past few months, micro-containment zones have been created. In some cases, only one house or a couple of houses or flats sharing a common corridor were sealed. This resulted in less inconvenience to people.

In containment zones, all essentials items, like grocery, vegetables and medicines, are provided through home delivery by government-monitored agencies and vendors.

Covishield, Covaxin can protect against…

Covid portal to cover all…

Booster dose of Covid must…

‘Be vigilant’, WHO tells Southeast…

WHO says will take several…